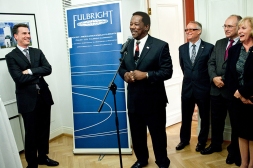 At times it’s hard to believe I gave over 100 lectures, concerts, and performances throughout Poland while serving there as a U.S. Distinguished Chair Fulbright Scholar from 2012-2013 with an extension through 2013-2014. From lectures to 5th-year university students; single lecture-demonstration engagements from middle through high school students as well to individuals in the surrounding communities; vocal and instrumental workshops for young and experienced musicians; as well as concerts with numerous amateur and professional musicians, I sometimes wonder how it all happened. One thing for sure though, these many opportunities would not have occurred in such a short time had it not been for the Fulbright Scholar Program.. Moreover, the prestigious Fulbright title allowed me to meet, speak and give, on several occasions, performances for previous U.S. Ambassadors to Poland namely, Lee A Feinstein followed by Stephen D. Mull as well as Consulate General to Poland Ms. Ellen Germain.

My story began as I arrived in Lublin, closer to Eastern Poland, mid. September 2012, and was welcomed again (my first Fulbright was here in 2005) by the most hospitable individuals one could ever meet. Nestled in the flat, owned by the university, with a beautiful small park outside the rear window and the university just a half a block or so from there I knew this going to be one of the most productive and memorable academic years in my life. In retrospect that was an understatement. The 2012-2013 academic year began in October and soon I was enthralled with teaching courses at the University of Marie Curie Skłodowska (UMCS) with an overall goal of showing students the connection between American identity and various styles and characteristics of American and African American music. First, I posed the question: What is an American? This was followed by identifying ten general characteristics of the American spirit which include individuality, creativity, freedom, culture, hope/faith, optimism, supportive/encouragement, forgiveness, spontaneous, and expressive. This goal was central in the courses I taught at UMCS, which included African American Music Appreciation, History of Rock, and African Americans in the Performing Arts. To say the least students were so deeply engaged in weekly conversations about American identity that soon we decided to add some extra curricular activities such as a film night once a week, a Skype session with university students from my home university in California, a weekly radio show at Radio Lublin Live with Magdalena Fijałkowska, and sometimes holding class discussions in my flat while we enjoyed eating Polish and American favorite dishes.

As a Fulbright Scholars we are encouraged to think outside the box in an effort to find innovative ways to bring about mutual understanding between people from countries worldwide with those in the United States. As a professional musician as well as an academician I quickly took advantage of this by giving numerous lectures and performances, speaking and performing as the U.S. representative for several U.S. Embassy and U.S. Consulate General sponsored events, various American Corners, and music workshops. To begin, on October 26, 2012 I gave a lecture titled “Blues, Bebop and Cool Jazz: Musicians Music” to students and faculty at the University of Warsaw. The next month I gave three lecture-demonstrations in three cities, namely Lubin, Chelm, then Radom, and in December I gave four lecture-demonstrations in Sosnowiec, Katowice, Lublin, and Zamość. Lecture titles for engagements in November and December included “Call & Response, Rhythm, and Vocalities: Three Staples of African American Music,” “Education Through Music Performance,” and “Stylistic Tendencies in Blues, Ragtime, and various types of Jazz.” With regard to lectures and performances for U.S.-sponsored official events, on February 19, 2013 I gave a 30-minute performance at the Grand Opening of the American Corner in Lublin where the honorable U.S. Ambassador to Poland Stephen D. Mull was also present and gave the keynote address in celebration of the official opening of the American Corner in Lublin. By the n
ext week I was involved in several tours that included events sponsored by the Office of the U.S. Consulate General, Ms. Ellen Germain, in Kraków where I gave lectures and concerts. On 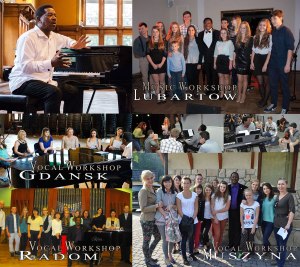 February 25, 2013 I gave two lectures titled “Blues Attributions in American Music” and “Music
Education in the U.S.” to students at the Music Academy of Krakow. That evening I gave a concert at the Szkoła Muzyczna Dla Dzieci z Dysfunkcjami Wzroku (Music School for the Visually Impaired Children). The next day I gave two concerts, one in Tarnów at the Zespół Szkół Muzycznych, and returned to Kraków that evening for a concert at Państwowa Szkoła Muzyczna II stopnia. The next day, February 27th I gave a lecture that morning titled ”African American Music as a Representation of American Identity” to American Studies students at Jagiellonian University in Kraków, and a concert that evening in Opole at Państwowa Szkoła Muzyczna I i II stopnia. On February 28th I traveled to Sosnowiec to give a concert at 11:00 AM to students and faculty of the English Department at Instytut Języka Angielskiego, Uniwersytet Śląski. That same day I traveled to Katowice where I gave a 2:00 PM Concert followed by a vocal workshop at the Katowice Music Academy. This particular tour concluded on March 1st with a performance for distinguished guests at the residence of the Consulate General of the United States Ellen Germain in Kraków. Of special note, that December 2013 I was asked by the U.S. Embassy in Poland to assist with the recording of “Jingle Bell Rock”, which was recorded with American Diplomats and polish staff. This is on the official YouTube channel of the U.S. Embassy to Poland.

One of the most rewarding experiences in Poland was the cooperation between myself and a young talented Polish vocalist and violinist, namely Klaudia Kowalik. In short, in mid. November 2012 I gave a vocal workshop, sponsored by the American Corner in Radom, at the Oskar Kolberg music school there. After listening to a number of vocalists, I took note of a then 15-years young singer who seemed rather reserved in demeanor. However, once on stage and singing, her vocal abilities quickly caught my attention at this young age. Two months or so later I contacted the American Corner (Directors, Karolina Adamczyk and Urszula Malmon) and inquired about Klaudia, and asking to meet her school director and family. Following this I realized she did indeed have an exceptional voice at this stage in her life. What’s more, she is proficient on violin as well. We began rehearsing and quickly developed a repertoire of jazz. Because of Klaudia Kowalik’s remarkable musicianship we were able to record a full CD, titled All About Jazz, to make available at our concerts. We soon began performing in several cities, receiving numerous media coverage on T.V.,radio, news print, and websites. One of our first most memorable performances to date was a command performance on August 16, 2013 for the

“End-of-the-Year Celebration” for U.S. and Polish Fulbrighters, which was held at the residence of the Honorable U.S. Ambassador in Poland, Stephen D. Mull. Klaudia Kowalik and I continued giving concerts and by early 2015 we had recorded a second album, titled Jazz is Alive!, which the city of Radom, Klaudia’s home town, purchased 1000 CDs to include in their materials representative of Radom. By 2015 Klaudia had given three command performances for events sponsored and attended by the former First Lady of Poland Mrs. Anna Komorowska. My relationship with Klaudia continues to this day by nurturing her musicianship as she enters a university. Helping her to travel to the U.S. in 2016 to record a couple of her original songs, including some performances, is a current goal. Of particular note I was surprised and honored with the Medal of Solidarity from the City of Radom for my continued efforts in supporting and nurturing the further education of young Polish students, and for contributing to the City of Radom’s international endeavors.

Being deeply moved by the number of students whose research interests centered on some aspect of American and more specifically African American culture, my fondness for Polish culture, and by my success as a lecturer and performer got me interested in extending my Fulbright Award through the 2013-2014 academic year. But this time I was asked to serve as a Fulbright Scholar in Krakow, where I would teach in the American Studies Department at the +650-year old Jagiellonian University (JU). Living in the cultural metropolis in Krakow I of course was now exposed to new experiences that furthered my understanding of Polish culture and their relationship to the U.S. Teaching similar courses to students at JU gave me some insight as to how students and society differ in an Eastern Polish university such as UMCS in Lublin from this former capital city of Poland, namely Krakow. One is not favored over the other as they each have their own charm and advantages for absorbing Polish culture. Depending upon ones area of expertise, research, professional opportunities, and sense of community, is what leads one to be more suitable over the other. Having experienced Eastern Poland such as Lublin, Zamość, Biała Podlaska, Chełm, and even the bordering Western Ukraine, living in Southern Poland and visiting its neighboring cities and towns was going to assuredly strengthen my knowledge of Polish culture. 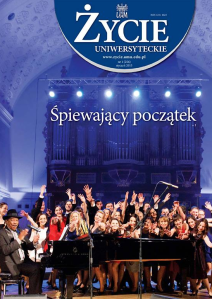 These opportunities brought other invitations such as working with Dr. Katarzyna Dziubalska-Kolaczyk, Dean of the Faculty of English Studies at the University of Adam Mickiewicz, and also performing with the wonderful chamber choir there under the direction of Krzysztof Szydzisz. One particular performance with this fabulous choir was so successful that for the first time a photo of the performance was on the front cover of the university’s academic magazine (as shown here).

In addition to my teach 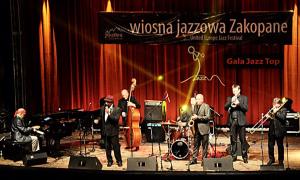 ing responsibilities at JU, I continued giving lectures and concerts in numerous cities throughout Poland. Soon I was thrust into the music scene in Kraków. Resulting from the lecture-demonstration I gave at the Kraków Music Academy, I was befriended by one of its professors, Wojciech Groborz, who asked me to come by a jam session at the well known Harris Jazz Club located in the Main Square. Little did I know what was in store. I learned that Professor Groborz was the pianist for one of the most well known Polish bands of traditional jazz, namely Jazz Band Ball Orchestra (JBBO). The sextet consisted of trumpet, saxophone/clarinet, trombone, piano, bass, and drums. They asked me to join them for concerts as the vocalist and sometimes pianist for concerts to date that include places such as Czchów, Człuchów, Dobrołęka, Germany, Giżycko, Iława, Jarosław, Katowice, Kraków, Krosno, Krynica, Lithuania, Łódź, Muszyna, Opole, Przemyśl, Radom, Rybnik, Siewierz, Slovakia, Suwalki, Tarnów, Węgorzewo, Warsaw, Wrocław, Zakopane, Zamość, Zielona Góra, and many others. I continue to give concerts with JBBO during a two month tour from July through August.

In closing, my many experiences in Poland extended beyond academic and music circumstances. For example, situations with Klaudia were not only musical, but social and cultural as well. Between our rehearsals in Radom I spent a significant amount of time with Klaudia’s fa 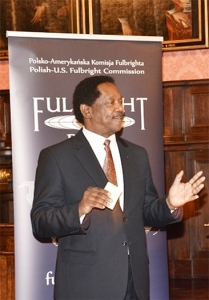 mily (who spoke as little English as my limited Polish). Through our encounters though, we were able to engage in conversation sharing our cultural experiences and gaining a great admiration for each other’s country. Traveling by car through countless cities, towns, and villages while on tour with JBBO has allowed me to truly experience Polish life on a number of layers. These and additional experiences are invaluable, as I have chronicled these encounters in an effort to encourage future Fulbrighters to seek ways and opportunities, such as what I have had, to engage in acquiring a fuller understanding of their host country’s culture and society. What better way to bring the people of Poland and the United States together than with the prestigious Fulbright Program!